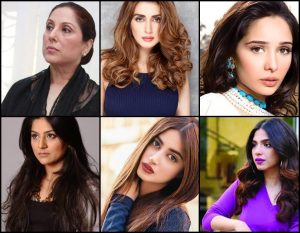 Sabreen Hisbani and Sanam Baloch are sisters , sabreen’s mother was sindhi singer . Sabreen’s parents were cousin but after divorce , Sabreen lives with her father because she was eldest child of their parent and  sanam baloch lives with mother , it was family’s decision that big siblings will live with father and little kids will live with mother. Sabreen said in her interview that as a child she had bear a lot due to fights between her parents and now her mental health does not allow her to get married and bear pressures of family life.

Sanam Baloch is one of the most loving tv actress of this era. Sanam said in her recent interview that she had not lived a normal child hood. she lives with her mother and at age of 13 she met her father , even she forgot her father’s face but when she become independent , she started to meet her father again. Now sanam’s father’s health is not good. Sanam is bearing all expenses of her father’s treatment.

Multiple sclerosis Disease Causing Agony to the Super Model. Unfortunately, the high-spirited and affluent Iman has been suffering from an illness called multiple sclerosis. She often deals with severe headache which comes with the package of her disease. According to report in 2006 , when she got the news that her father legendry actor Abid Ali sahab is getting married to actress Rabia Noreen , she got stressed out and then their parent decide to go for divorce which effect her more and she become victim of multiple sclerosis. Main cause of this illness is stress and depression.

Sonya Hussyn reveal so many facts about her personal life in recent  interview , she said that her father left her mother and got married to some other woman just for son, her mother use to shout hysterically when she was in depression because her mother cant bear this thing.When her father left mother , her mother suffers depression and she blames some relative too who urge her to father to get married again to have son.

She said that as a child she realize that she has to take the responsibility of her family , and she started to earn when she was so young. She said that at that time she use to cry a lot even once she ask her father he got married again so her father slap her but she has forgiven her father because she thinks that man can do mistakes and we should forgive others.

He was born on April 4, 1973 in Rome, Italy. He was raised in Italy and attended IN Elemental School, St. Geovanni for his early Education, and later came to Pakistan and now lives here. Shamoon ‘s mother was first wife of Zubair Abbasi writer . Shamoon Abbasi’s mother was living in Dubai after taking divorce from his father. Shamoon accept the truth that he miss his mother the most and mother is the only person who can give unconditional love can forgive your mistakes.

Shamoon stated about divorce and marriage

“In all my 3 marriages, I realized that women do not like everything to go steady. When everything is going right, they want that there should be some fluctuation. I felt like I needed someone who would be willing to change for me but women want me to change, they want a saint. I do not cheat, I do not gamble but I am not perfect either and I needed someone who would accept me for who I am.”

Samina Pirzada reveal in her interview that at very early age her parents parted their ways . It was her mother who let her to join films and dramas of that time. Samina Pirzada is big name of television as she owns Piruz cafe in Lahore . Samina ji is great legend of Pakistan .

Samina Pirzada reveals that her parent were also not living together but after years she talk to her father why he left her and her mother , samina said that parents should also need to say sorry to their children for giving them stress as child.

In an Interview Urwa Told that her mom and dad got separated long ago. so thats why we are seeing him for the first time on her wedding . She also told that we had to work on our own to pay our bills and to study.so Urwa started modeling and worked as VJ on Ary Music

The mother of the talented singer/actor Meesha Shafi, who has worked across the world, is none other than the veteran actress Saba Hameed. Saba has been working in the drama industry for the past three decades. Recently, the singer also was one of the judges of ‘Pepsi Battle of bands’.Meesha was seen in Jawad Ahmad’s Bin Tere Kia Hai Jeen. Meesha ‘s mother divorce from husband when she was a child. Last year Meesha’s father died due to cardiac arrest.

Aminah Huq is Mustafa Kharr’s daughter from one of his earlier marriages. He was the Chief Minister and then the Governor of Punjab in 1970’s during Bhutto regime. Sherzade nilofar haq is mother of Aminah and unfortunately Sherzade and MR Kharr parted their ways . Sherzade hates her MR Kharr a lot . According to media her mother use to said in parties that she want to bring Kharr’s daughter in showbiz to take revenge from him .
Amina Huq is settle in America now and she take divorce from Fashion designer Ammar Belal.Ammar is fashion designer and son of Lahore based Kashmiri Industrialist . Her sister Sarah Belal is handling their Business in Pakistan .

Juggan kazim confess in her interview that she comes from broken family . Her mother was divorced and now her father passed away. Juggan tells that she has regret that there no one like father who can protect her when was in trouble . Her mother was unhappy with her showbiz career . Juggan tells in her interview that her mother ‘s relatives are in showbiz but she was scared that if juggain join showbiz who will be there to protect her and give her security .
Juggan said that all her mother’s relatives are in media and even they are helping there family members to become more stronger in showbiz. Like Jugnoor Mohsin and Najam Sethi are relatives of her Juggan’s mother who is educationist herself. Today juggan is independent and great example of self made personality .

While talking on famous show Rewind With Samina Peerzada, QB tells that she grew up in her phupho’s house because her parents divorced when she was young. She recalls their relationship saying that both of her parents belonged to a different school of thoughts and never got along. Due to them being poles apart, their relationship was never pleasant.
It resulted in her father divorcing her mother, and choosing to live with his second wife. Later her mother took custody of her sister and also left her to live in the United States.
QB talked in detail about how living alone for the most part in life shaped her opinions altogether. She said that she made many efforts to bring them on one page and save the relationship they had but failed. She recalled that back in 2013 when she met a serious accident, it was after ages that she saw her parents in one room. But soon, it again turned into a hot battleground where both of her parents were arguing with each other while she laid there fighting for her life. She said that at that moment, she finally decided to give up on them.
i have observe that kids from high profile broken families influenced by their fathers more because of their super star daddy’s stardom.
most of stars from broken families entered in their father’s professions.

In recent interview Sajal Revealed about her relationship with father . She tells in media that she was angry with her father because her left sajal ‘s mother when she was in pain . He got married to some other woman .
sajal’s statement
“My mother had a difficult time when my father left. I worked hard and became financially stable and told him we didn’t need his money. I was angry ‘kaisay doosri shaadi kar li!’ After my mother’s death, I eventually learnt to let go. My father speaks regularly with us now and is very proud of me.”
courtesy
https://images.dawn.com/news/1178922/
Sajal was disturbed because of her father’s second marriage , the way he left her mother when family needs him makes her childhood more tragic . However things are normal now sajal ‘s younger brother is in Australia for studies her elder sister Saboor Ali is also getting good projects now.

Ali’s father is former army officer. His family had terms with Nazia Hassan’s family. In 1995 Ali Saleem’s mother got divorce from her husband. For Ali it was a disaster that his parents were separated.AlI’s mother loves her son a lot.
Iman Ali and Rahma Ali
The supermodel and actress Iman Ali and her younger sister Rahma came from a broken home. Iman Ali is the daughter of Abid Ali and Humaira Ali.
I have read in a interview of Humaira Abid (year 2006) in which she has accepted the truth that Iman has never compromise in field of showbiz thats why they are not even able to purchase their own home. with this statement we can assume that Iman is not like other actresses and models who only work for money and fame.
When Iman Ali was young, her mother left Abid Ali and took Iman with her to live in a separate house. Iman Ali has spent all her life with her mother in a separate house.
Iman’s mother said: Abid was a big cheater so I left him and decided to live with my daughter in a separate house.

Ayan’s father is not living with her since the time when Ayan was only 4 or 5 year old.
Her father divorced Ayan’s mother because he don’t want his wife’s interest in glamour world even her father was also against ayan’s presence in showbiz world.
ayan’s khala is her father’s sister in law (bhabhie) too.

sawera nadeem is superb actress but sawera ‘s father divorced her real mother and her father owner of ajoka theater married to madiha gohar now.
Sawera’s step brother is also doing tv dramas but he is not very successful as his sister sawera is.

mikal’s mother was a single parent ,mikal is on 3 number among 7 siblings.mikal has step brother name junaid in same field but he is more active in England.
Mikaal ‘s mother works in Islamabad and her father was in foreign office.

Momal Sheikh and Shehzad (the daughter of Javed Sheikh) also came from a broken home.
as we all know that Javed’s younger hood is full of presence of colorful girls that’s why her first wife Zeenat do not agree with the formula of a compromised marriage.
i have observe that kids from high profile broken families influenced by their fathers more because of their super star daddy’s stardom.
most of stars from broken families entered in their father’s professions.