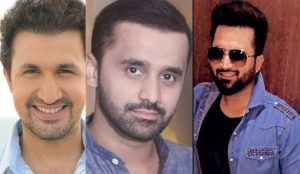 Muhammad Yousuf is kind of player about who we can surely says that this guy will win game for Pakistani single hand. There are very few people who know that Yousuf was tailor before becoming professional cricketer.

In start she use to do Radio but after she get good roles in dramas and all the perks she gets for being an actress helps her to decide about showbiz career. Today Farah is one of the most competent morning show host. Farah comes from humble background. Her father was strict man . The way her mother struggle in her life makes Farah Ambitious . Her mother was like lesson for her and she decide that she will live according to her own desire . She remember when her mother was hospitalized no one come from her relatives to attend her , at that time 17 years old Farah has to face all hardships alone . When she was  10 years old , her father slapped her for misbehaving with her Phupo who dont allow her to eat Paratha during childhood.

I am not saying that Mahira was poor before getting fame but its true that Mahira used to wash washrooms in America and some other part time jobs to survive their.Shee accept that in her interviews. Mahira Khan’s  first job in LA was as a cashier at Rite Aid where she had to mop floors, clean toilets, run the till and shut the store at night. Even she disclose that she use to wash wash rooms in USA to earn money.

Falak Shabir confess in his interview that he bunked Madrassa, his parents want him to see Hafiz Quran. He use to read Naat   and his Qirrat was excellent  when he was child. He said that he has worked so hard in his life before become famous . Falak said that he use to work as dispenser at local quack ‘s clinic . He also reveal that he use to work as salesman at Pace shopping mall Lahore. As we all know Falak is blessed with melodious voice so he become most popular singer among youth.