Home / Glamour world / Huge pay hike for celebs, Lets check Who gets paid what in Showbiz

Huge pay hike for celebs, Lets check Who gets paid what in Showbiz

Huge pay hike for celebs, Lets check Who gets paid what in Showbiz 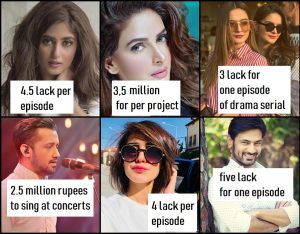 These are the stats provided by different website of showbiz which tell how much our celebs are getting for dramas , films , morning shows and night shows.

This is how much drama writers charge

High profile drama writers like Umera Ahmad, Farhat Ishtiaq , Faiza iftekhar and Khaleel ur rehman qamar charges 20 lac for one project and other writers use to charge 9 to 15 lack for one 22 episode long serial.

According to a source, Rahat and Abida are among the highest charging singers who receive between four and five million for their performances at gigs. Others such as Atif, Ghulam, Hamid and Ali demand between three and four million. Though still expensive for many, singers such as Arif, Naseebo and Humaira charge around one million.

This is how much actresses are charging for dramas 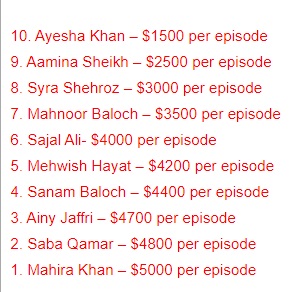 for more you can visit this link

According to reviewit.pk these are stats of how stars getting these days

for more info you can visit this link

this is how much morning show hosts gets paid

Sanam Baloch makes about 2.8 lakh per episode on Sama tv and she is working in dramas too.

Faisal Qureshi get 1.5 million per month on Ary Zindagi.

Sahir Lodhi get 7 lack per month on tvone.

Shaista Lodhi earns more then (3 million) per month on GEO TV. Shaista is now working as dermatologist and she has also said good bye to showbiz.

Sanam Jung gets paid around 2.5 million per month for her morning show at Hum TV. Now sanam has ended her contract with humtv maybe we will see her soon on some other channel.

Nusrat Haris earns 7 hundred thousand (7 lakh) per month and that so much through hosting morning shows.