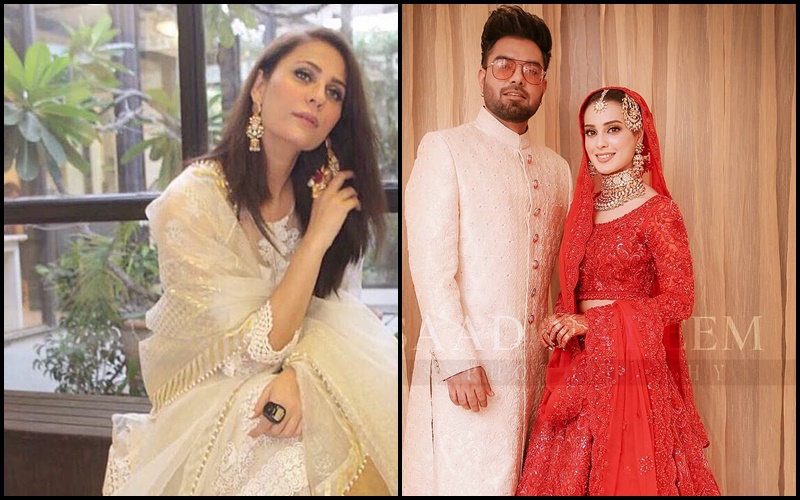 Yasir Hussain is one of those celebrities who always manages to stay in the limelight for all the wrong reasons. It seems like it is impossible for him to spend even a week without getting himself into hot waters. From calling the actors of the blockbuster Turkish show Diriliş: Ertuğrul “garbage” to squabbling with his co-stars, netizens are always calling Yasir out for his disrespectful behavior and words. This week, Yasir landed himself in another controversy when he appeared on Vasay Chaudhry’s talk show ‘Ghabrana Mana Hai’. Here’s what went down.

I didn’t invite Nausheen to my wedding – Yasir Hussain

‘Ghabrana Mana Hai’ is a new talk show that premieres every Sunday on ARY Digital, with Vasay Chaudhry as the host. He invites a new celebrity guest every week and in the latest episode, Yasir Hussain was the celebrity guest. While generally talking about Yasir and Iqra Aziz’s wedding, Vasay inquired whether the wedding had any “extra” guests. He was talking about the people from the industry who Yasir had not invited to his wedding but had still come forcefully. To this, Yasir replied that he had not invited Nausheen Shah, but she still came anyway.

The two “gentlemen” then went on to make fun of Nausheen for a few minutes. Vasay even quipped that maybe Nausheen attended the wedding because she wanted to see what a wedding looks like, considering she isn’t married herself. Mocking Nausheen’s popularity, Yasir said that maybe after this incident, she will become popular.

After the clip from the show went viral on the internet, everyone was waiting for Nausheen to say something. Although she didn’t say much directly, Nausheen took to Instagram to post a story with the caption “When you are busy building an empire, you don’t pay attention to nonsense. I am too busy to get distracted.”

But soon after that,  Famous web news site Galaxy Lollywood reached out to Nausheen for her comments on the matter, and she said,” Would anyone go someone’s house uninvited? I wouldn’t go to anyone’s house if I wasn’t invited, let alone going to someone’s wedding.” She also added, “A fool is known by his speech and a wise man by his silence. Yasir called me himself and invited me. I feel so sorry for Yasir because certainly has serious memory issues. I also feel really sorry for Iqra. She is taking one for the team”. Nausheen also said that she is disappointed in Yasir and expects him to apologies.