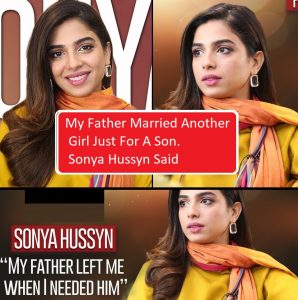 Sonya Hussyn reveal so many facts about her personal life in this interview , she said that  her father left her mother and got married to some other woman just for son, her mother  use to shout hysterically when she was in depression because her mother cant bear this thing .When her father left mother , her mother suffers depression and she blames some relative too who urge her to father to get married again  to have son.

She said that as a child she realize that she has to take the responsibility of her family , and she started to earn when she was so young.

she said that she had no time for useless things like love, she had already waste so much life but now  she has realize.  according to her  she don’t think that her family is ready for her absence because her siblings needs her support.

Sonya talked about her broken family and how she suffered in her childhood.
“My father left me and my sister when I was 8 years old. I am the eldest sister when I was born people used to say ‘oh, a daughter has been born’. My father was under pressure of society. They set this ideology in my father’s mindset that a son is very important. Due to this reason, he got married again, she revealed.”
She continued, “A miracle happened, my stepmother gave birth to a son and right after one month my mother also gave birth to a son. After this, my family started breaking. I had a very difficult childhood.”
Previous Latest Clicks of Sania Mirza and Shoaib Malik with their Son Izhaan Mirza Malik
Next Sonya Hussyn’s Emotional Break Down While Telling About Personal Life