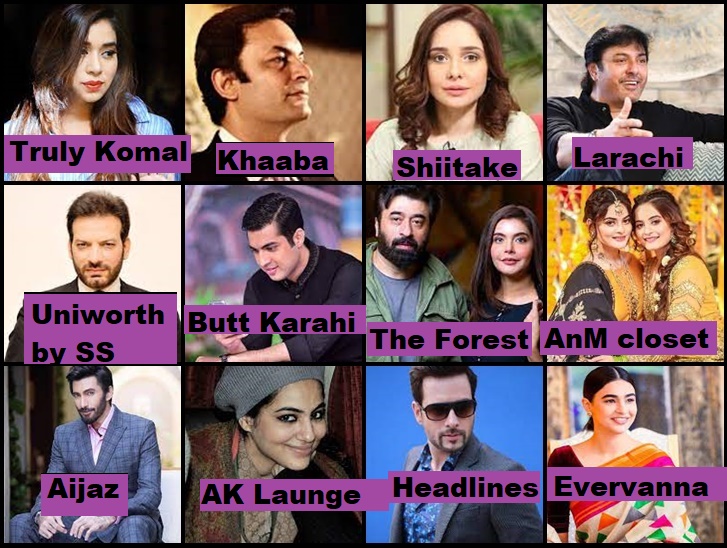 In Pakistan there so many big stars who run the profitable side business. To maintain their status they need to earn extra income for that purpose, they start new businesses like outlets, productions houses and other. Here is the list in which we include names of actors, hosts and model and sports stars who run side businesses.

1 Shahid Afridi owns Splice which is now called Al-kabab in Lahore. According to sources famous cricketer has shares in hire company too but not confirm.

4 Ahsan Khan has an outlet of cloth in Lahore. Ahsan is established actor now. He needs no introduction in field of dramas.

9. 7th Sky own by Abdullah Kadwani . Very few people know that Abdullah was actor and he use to play lead roles in Ptv dramas of 90’s.

11 Samiya Mumtaz owns farmhouse where she grows organic food and she has also small shop name Panjeeri in Lahore.

12  Junaid Jamshed is old in the business circle of outlets.His outlet in Lahore ,Karachi and USA etc.

15 Shaguta Ejaz also runs a parlour in Karachi. Shagufta Ejaz is fine actress. Her daughter Haya Ali is managing all work of their beauty salon.

16 There are so many celebrities who launches their lawn brand like Vaneeza Ahmed Mehwish Hayat,Ahsan khan and others.

21 Now actor Mikaal Zulfiqar started his own production house . Mikaal Zulfiqar runs branches of Salons and spas in Lahore. Headlines by Mikaal is brand name of handsome hero. He is also running E commerce start up.

24 Aijaz Aslam Aijaz Aslam has his own brand name Aijazz the fashion store . Aijaz owns a production house too. Aijazz has recently started his skin care brand as well. Aijaz has charismatic personality . He is serving Pakistani dramas for years. Chaudhry Nazakat from Kis din mera wehya howe ga is his most favorite character of drama lovers.

26  Inzamam Ul Haq Legends By Inzamam Ul Haq is name of Inzi’s clothing store in Lahore. Inzamam is owner of Meat One , a chain of specialty meat shops.

28 Javeria Saud owns a production house. Yeh zindagi hai was the most famous production of JJS .

29 Gorgeous Jana Malik provide house on rent for drama productions in Lahore. This is side business of Jana to provide locations for drama serials.

33  Jana Malik provides homes on rents to tv drama producers. With acting Jana continues her side work by giving her place as drama sets.

36  Aleem Dar’s forefathers were Chef and professional chefs . Their foods were most famous before partition that why Aleem dar opened hotel name Dar’s Delighto . His son is trained chef as Aleem want to continue his real identity of chef thats why he opened resturent for his son.

37  Sanam Jung sister Anum Jung has just started her own clothing outlet in Karachi. Sanam has three sister and anum is youngest one who is studying at Indus valley school of fashion designing.

42 Saeed Ajmal runs his own out let in Lahore.

43 Famous Pakistani actor Noman Ijaz has recently launched a restaurant in Canada. Located in Milton, Noman Ijaz’s restaurant named “Larachi by Naumaan Ijaz” consists of Pakistani cuisines. … The wife of Noman Ijaz was spotted along with three sons during the restaurant’s official opening.

45 Uniworth by Saleem Sheikh is owned by famous hero of early 90’s Saleem Sheikh. ‘Saleem Sheikh by Uniworth’ urges to provide the modern men with classy ethnic wear in a style like never before. The collection is in synchrony with the modern lifestyle of men, completing their mantra of being chic, trendy, elegant yet sophisticated. Ranging over a combination of colors and designs, the vibrant palettes and extra attention to the smallest of the details will give you the perfect ethnic attire for all your special occasions.

46 KHAABA by NAUMAN MASOOD is newly launched eatry by actor Nauman Masood. Is based in Islamabad’s Jinnah Super f7.

47 Yasir Nawaz and Knwar Arslan joined hands to open a new restaurant by the name of The Forest in K-Town. The restaurant was launched last year.

48 Sameena Peerzada along with her husband own a theatre house Rafi Peer Theatre group along with Peeru’s cafe which is owned by Usman Peerzada and brother in law Faizan Peerzada.

50 Saheefa Jabbar is a relatively new actress who established herself as a model first. She has her own unique style which is liked by many. Recently this young actress also joined the league of those actors who run their own businesses by launching her own clothing brand titled ‘Evervanna’. This is a new project which is really close to her heart and the designs clearly reflect Saheefa’s personal style. She also did the modeling for her brand.

51 Arisha Razi and Sarah Razi also stepped into the business world in 2020. They launched their own clothing brand with a catchy title ‘It’s for You’. They also did some of the modeling for their clothes themselves and are really enthusiastic about this business venture.

52 Singer and actor Umair Jaswal is also an intelligent entrepreneur who launched his own line of active apparel called Revamp this year. It started as an online shop and now he is all set to open a physical store. He is another one of those celebrities who are actively involved in their business and it has been running smoothly because of this involvement.

53 Sunita Marshall talked about the financial struggles she went through in one of the recent interviews and that was the reason why she decided to start her own business. She has opened up her own online boutique with make-up, accessories, and clothes handpicked by her. She also was running a business previously with the title ‘Book My Memories’.

54 Komal Aziz is another young actress who runs her own clothing business which she has often promoted on morning shows as well. She always liked designing clothes so she decided to take it up as a business project. Her brand is titled ‘Omal by Komal’ and she recently started taking orders for personalized Khussas as well.

55 Aiman and Minal Khan started working in the entertainment industry at a really young age. That is why even though they are still young, they have managed to save enough money to make the most of their popularity by starting their clothing brand. Their brand is called AnM closet – Aiman Minal Closet. Their outfits are usually formal and Minal has been doing most of the modeling for the photoshoots. Aiman and Minal are brand ambassadors for their brand. It is really wise of them to start a business so early in their career.