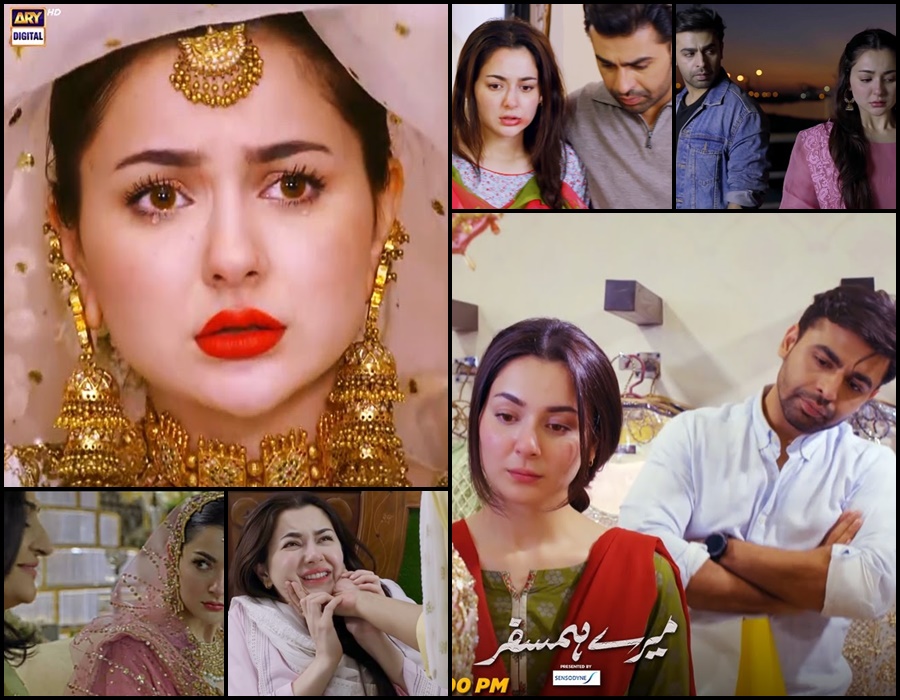 The super talented and versatile Farhan Saeed, who was last seen in Prem Gali and an Eid telefim Love Vaccine, is  winning hearts  for his character of loving caring guy Hamza in  drama serial titled “Mere Humsafar”, in which he is  star opposite the ever gorgeous Hania Aamir.  Written by Saira Raza, Mere Humsafar is produced by Six Sigma Productions and currently air on ARY Digital . At the moment Mere Humsafar is trending on Youtube in 5 countries including Pakistan , India, Bangladesh , Nepal and Saudi Arabia.

Hania Amir is perfect choice to play Hala as her features are similar to people born in Europe as Hala is shown Britisher in Mere Humsafar who comes with her Father (Aly khan). I dont have words to describe how finely Hania did her job. When is saw her Vlog i was amazed that she is the same girl who is playing innocent Hala in Mere Humsafar.

First of all i want to tell our views that Mere Humsafar is original script and not based on novel. Mere Humsafar is written by emerging drama writer Saira Raza whp has already prove herself with hit tv serial Muhabbat Daagh Ki Surat.

Mere Humsafar a family drama reminded of old Ptv drama Afshaan by Fatima Surraiyya Bajia on aired in 70’s. Both Plays Have similar kind of starting as in Mere Humsafar we saw Hala’s father refuse to take her responsibility and gifted his British National daughter to his displeased relatives who lives in Pakistan.

In second episode they introduced Hala as vulnerable college girl. Tai Jaan is too strict with Hala as we observe in start that  Dadi only taunts Shahjahan and speaks sarcastic dialogues and Shahjahn’s behavior and attitude deserves it. On the other hand Shahjahan treats Hala with jealousy, pride and hatred. She never gives her good and sufficient food, drink, money and proper clothes to wear. She even wants to kill her and many a times twisted her hands and behaved very badly. She taught her wrong things as a result she could not get admission in a good school, every time stops her from going to coaching and school and overloads her with household work. Dadi never removed the maid but she did and treats Hania worst than a maid. A very bad MIL.

Their acting and delivery of each and every character in this serial is fabulous , in short people still associate to it because such characters like Tai Jaan exist among us.

Saba Hamid’s character is also very strong and thought provoking. The way her MIL treats her she treats her DIL the same way and this cycle is almost in every household of Asia. The toxicity in saba’s character is actually injected by dadi. And i still feel dadi didn’t treat her rightly, inspite of whatever Saba(tai jaan) do.

Farhan is trying to break that stereotype which is making it kore successful. Only Hamza role Farhan Saeed is playing a responsible husband role creates magic . Romantic style of him, how he is protecting her the keys of success of this drama. After watching this play many girls are expecting life partner like Hamza they showed in Mere Humsafar. Till now we witness Hala’s fairy tale wedding with Hamza and Sameen action of trying to harm herself. At the moment Mere Humsafar become more interesting. People have doubt that may be in next episode we will grey shares of Hamza’s character in promos Hamza ask Hala that she should stop complaining about his mother Shah Jahan.